The Expressivity of Artifical Neural Networks (2017)

Masters thesis at the University of Oxford, supervised by Varun Kanade

My masters thesis explored the last of these explanations, sometimes called Network Expressivity. Let \(\mathcal{F}_\mathcal{N}\) be the set of functions representable by an ANN \(\mathcal{N}\) as its programmable parameters vary. Because understanding \(\mathcal{F}_\mathcal{N}\) does not depend on the dynamics of a particular training methodology, explorations of expressivity are arguably the most mathematically simple of the above explanations. And yet, the relationship between a network's structure and the space of functions that it can express is far from being satisfactorily characterized, even at the coarse level of depth versus width for fully connected networks.


In my thesis I surveyed known results as well as contributed a few small theorems. Among those surveyed were:


My original contributions include:

Error Propagation in the Boson Sampler

Introduced by Aaronson and Arkhipov in 2013, the Boson Sampler is a quantum-computing device which produces samples from a probability distribution associated with the scattering of photons through a lattice of linear optical elements. It is one of the most promising avenues to demonstrating quantum supremacy because the sampling problem it solves is believed to be hard for classical computers.

While the promise BosonSampling holds is thrilling, Aaronson and Arkhipov's result is for an idealized device, one where the input photons are prepared perfectly and the optical lattice perfectly implements the prescribed unitary. For the boson sampler to represent a true refutation of the Strong Church-Turing thesis, its physical realization must be able to closely-approximate the idealized version's operation—that is, it must be robust to realistic errors in state preparation and operation.

Supervised by Ivan Deutsch, I worked with Tyler Keating to characterize how Gaussian noise in photon state preparation propagates to error in the probability distribution from which the device samples. We discovered these errors grow only linearly in the dimension of the space, suggesting the "noisy boson sampling" problem solved by a physical realization of the device could realistically maintain the classical hardness of the idealized device. Techniques used were largely elementary, some borrowed from Bernstein and Vazirani's original paper on quantum complexity theory. Unfortunately, publication of our finding was preempted by the publication of a similar result by V.S. Scheschnovch, albeit with a different mathematical approach.

Published in the proceedings of the 7th International Meeting on Origami in Science, Mathematics, and Education. 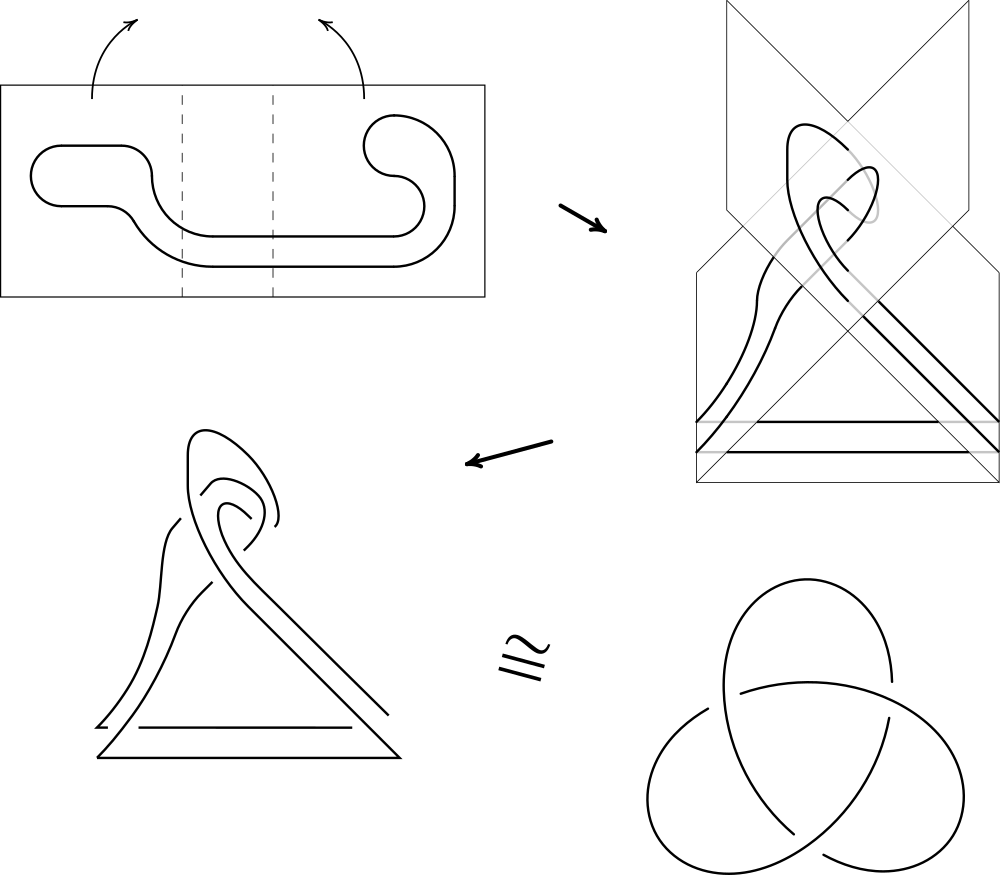 In this improper folding, a closed, simple curve is mapped to the trefoil knot.

This paper represents the first focused study of origami knot theory. In it we introduce a topological model for origami folding, define a novel knot invariant—the fold number—based on origami principles, and resolve a 20-year-old conjecture of Jacques Justin.

Origami can be formalized as the set of maps from the square to \(\mathbb{R}^3\) which are piecewise-linear (composed of creases) and which preserve the distance between points on the paper (no tearing or stretching). Usually, the mathematical study of these origami maps is restricted to "physically-realizable" maps, which are the closure of the set of injective origami maps. (See Demaine & O'Rourke 2007 for an excellent overview).

However, if one allows an origami folding to nontrivially intersect (such as in the figure above), knots can be formed! We show that knots are present as one-dimensional submaps of non-physically-realizable origami foldings, and indeed for any tame knot \(K\) there exists a folding which admits an equivalent knot as a submap. This motivates the definition of the fold number of a knot \(K\) as the minimum number of folds in an origami folding which admits an equivalent knot to \(K\). We present one loose upper-bound on this invariant, but many question about it remain, including whether or not it is constant.

Further, we address a conjecture made by Jacques Justin in his seminal 1997 work, "Towards a mathematical theory of Origami." He proposed that if an origami folding is physically realizable, its perimeter is mapped to the unknot. We resolve this conjecture positively in the case where the paper is simply-connected.

Closed meanders of order \(n\) are classes of Jordan curves that transversally intersects the \(x\)-axis \(n\) times, modulo homeomorphisms that map upper to upper and lower to lower half-planes. Meander enumeration (how many meanders are there of order \(n\)?) is a longstanding open problem.

I defined an \(n\)-ary combination operator which creates a larger meander from smaller ones. This operator gives rise to an operad where each meander of size \(n\) corresponds to a morphism from \(1\) to \(n\). Using this structure, one may then derive a recurrence relation by counting how many ways to combine meanders of smaller size modulo certain symmetries.

However, the recurrence is only part of the puzzle as the Meander operad is not finitely generated: for many \(n\) there exist indecomposable meanders which cannot be created by combining smaller ones. These "prime" meanders are particularly serpentine, and fortunately easily characterized: a meander is prime if and only its permutation (the order of its intersections with the \(x\)-axis if you walk along the meander curve) is a simple permutation (that is, a permutation which does not map proper non-singleton intervals to intervals). Given the known difficulty of counting simple permutations, this primality result may suggest that meanders are similarly difficult to enumerate. 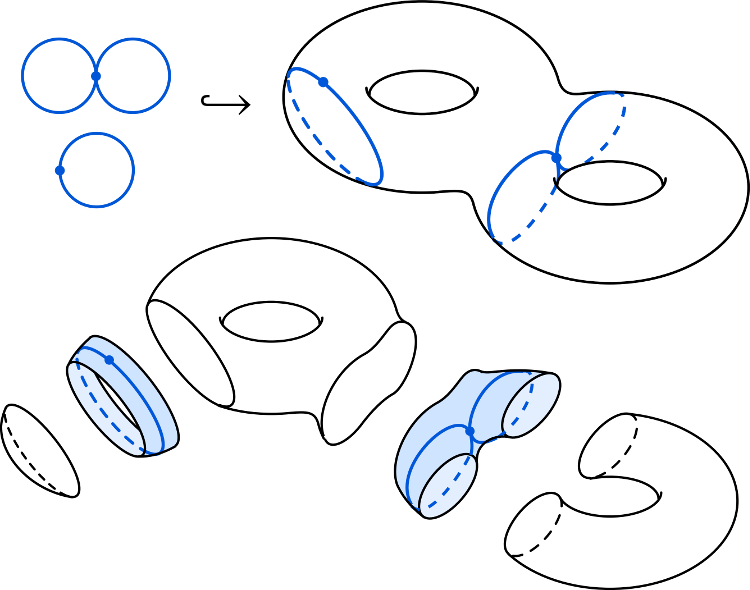 The pictured graph \(G\) has an embedding on the 2-torus such it separates the surface into three connected components, while no proper subgraph does so under the same embedding. Therefore \(G\) 3-separates the 2-torus.

Classical questions in topological graph theory (such determining the minimum-genus orientable surface in which a graph \(G\) embeds) are deeply connected to \(k\)-separatingness, and embeddings are also minimal appear in a variety of applied math contexts because they are the boundaries of Voronoi tesselations on surfaces.